An update to the model.

The stairs’ vaulting got an overall modification as they first followed the slope of the staircase but now rise by step, which is more consistent with the style of that era and allow for a proper vaulting of the stairs, although I haven’t seen the actual remain of the tower so I cannot confirm that it is the case in reality. If anyone got some picture of information about that and anything else concerning the tower I would be happy to know.

Then, most of the arrow loops and windows are done with  one or two exception, most notably a window between first and second floor which is nowhere on any plan but appears on a picture I found on the net.

I also started modeling the base of the columns of the great hall (second floor) as well as the chimneys.

The top of the tower received the supporting walls for the roof and some basic timbering to support the floor.

Lastly, I fixed the spiral staircase with the rest of the walls and had the steps match the floors. For this, since I do not know how many steps nor their height, I used a fairly common step size for that era, about 20cm, and used the indication of VLD in his plans that usually show fairly accurately the start and stop of the stairs at each level. Then, I tweaked the height of the steps to match start and stop points. 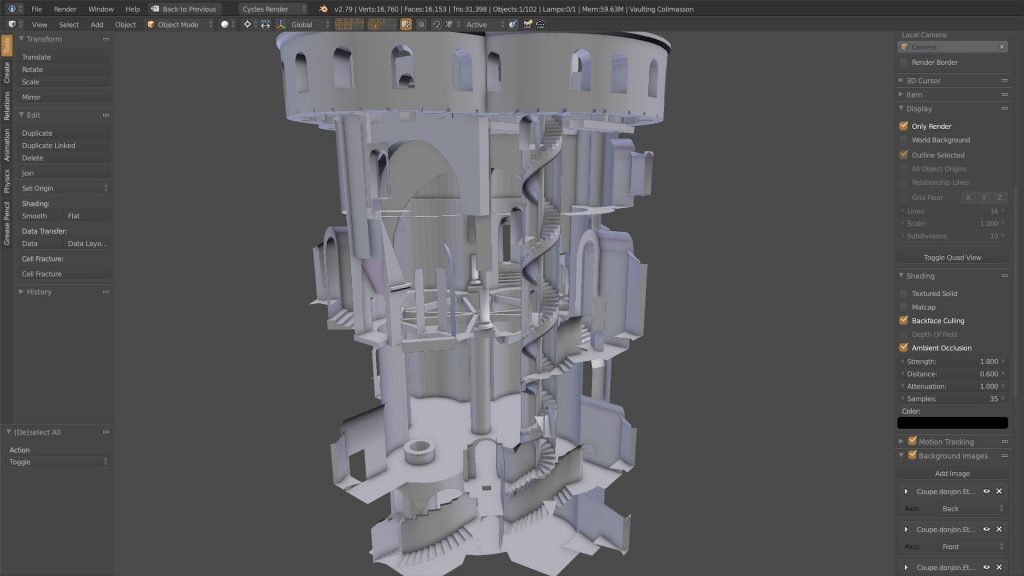 I still have to fix the entry of the tower, which is entirely missing nowadays and poorly documented (obviously, since it was long gone before anyone would think of documenting the site) and of course build the roofing. But that’s for an other time.

While coming across the description of the donjon of the castle of Etampes (France, Essonne), also known locally as the Tour de Guinette, and finding some plans and photos, I thought it would be a nice break from my C# learning endeavor. So I decided to go back in Blender to model the tower, following the plans quite rigorously, with the most possible details while keeping the polycount as low as possible.

Quickly, I ran into several problems. First, as usual, modeling anything curved with intricate geometry quickly becomes complicated if you want to respect proper geometry and keep the number of vertices on the low side. Second, they were different plans and projections of the tower, but they were not all consistent with each other, and since I didn’t want to make a fantasy structure, I had to do more research and try to sort out why those plans wouldn’t match and what would be the best interpretation to come up with. Unfortunately, I don’t have the opportunity to actually go to Etampes and look at the remaining structure of the donjon to help me make an educated guess, but thank Internet, there are a few pictures out there that came into great help. Especially the pictures of a fellow who flew a drone right above the tower looking downward. Third, while not so surprising, some actual features where not documented at all, but could hardly be left out of the model without compromising my initial goal.

So, I spent quite some time looking at the pictures, the plans, the projections, trying to make sense of it the best I could. The fact that the tower is heavily ruined nowadays with some parts entirely missing doesn’t help but in those areas hard to reconstruct, I resorted to make my best guess while respecting the period architectural style (XII century mostly). A lot of researching and reading later, this is what I came came up with so far. It’s not finished yet but it’s on its way.

Modeling the crenels was a tricky part as they are closed with an arch that is itself cutting through two concentric circular wall faces. I could have make it a lot simpler by connecting all the edges of the arches on the sides of the crenel but doing so would create some odd shading.

My initial approach was to lay down the structure of the parapet flat from the top and then to extrude it, but it created a huge problem later on while trying to carve the arches in the crenels because of the concentric nature of the parapet.

This parapet is base on Viollet le Duc restitution of the tower, but VLD being VLD, it is not exempt of a bit of, let’s say, idealism. As we can see on probably the oldest known remaining representation of the donjon in the Très riches heures du Duc De Berry (XV century, lower left corner in the picture above) the parapet was represented without any arching whatsoever. But I decided to model the VLD proposition regardless as it was more challenging and, let’s be honest, a lot more appealing visually. I might model something closer to what it might have been later on just for the sake of realism.

The arches inside the tower which held the top floor and the roof are not there anymore but traces of it are clearly visible on the walls to this day.

At this time, the geometry is separated in several pieces, one per floor at least, one for the external shell, and one for each important additional feature that are not yet completely adjusted, like the spiral stairs, columns, ceilings etc. This makes the whole process of editing much simpler and easier.