It’s been a while and I almost completely lost track of that project. I moved to an other country, my eldest daughter graduated this year, I got plenty of work on the waiting list and Sketchup was way outside of my radar lately until I got a message from someone, which might not be a spam for once, saying that he liked my posts. Well, that kinda surprised me a bit at first and got me to open the file and look at it again. I noticed that I made a few more additions to the model since  its last submission and so, despite being busy on several other projects, I thought why not at least post a few screenshots of the latest stage of the modelling. Nothing fancy though, but hey, since it’s done and apparently some people are taking interest in this, I guess it wouldn’t hurt anyone.

While I mostly work in Blender 3D now, I still enjoy Sketchup now and then for quick prototype and above all, for real shadow projection. Mind you, this feature alone is brillant if you have to deal with real architecture. For instance, you could preview the kind of sun/shadow coverage you can get on any given building with the help of Google Earth, for the whole year. This is great if you intend to buy a house or property, make renovations, study a reconstruction of a structure or archaeological site.

So here’s the model where I left it some years ago. 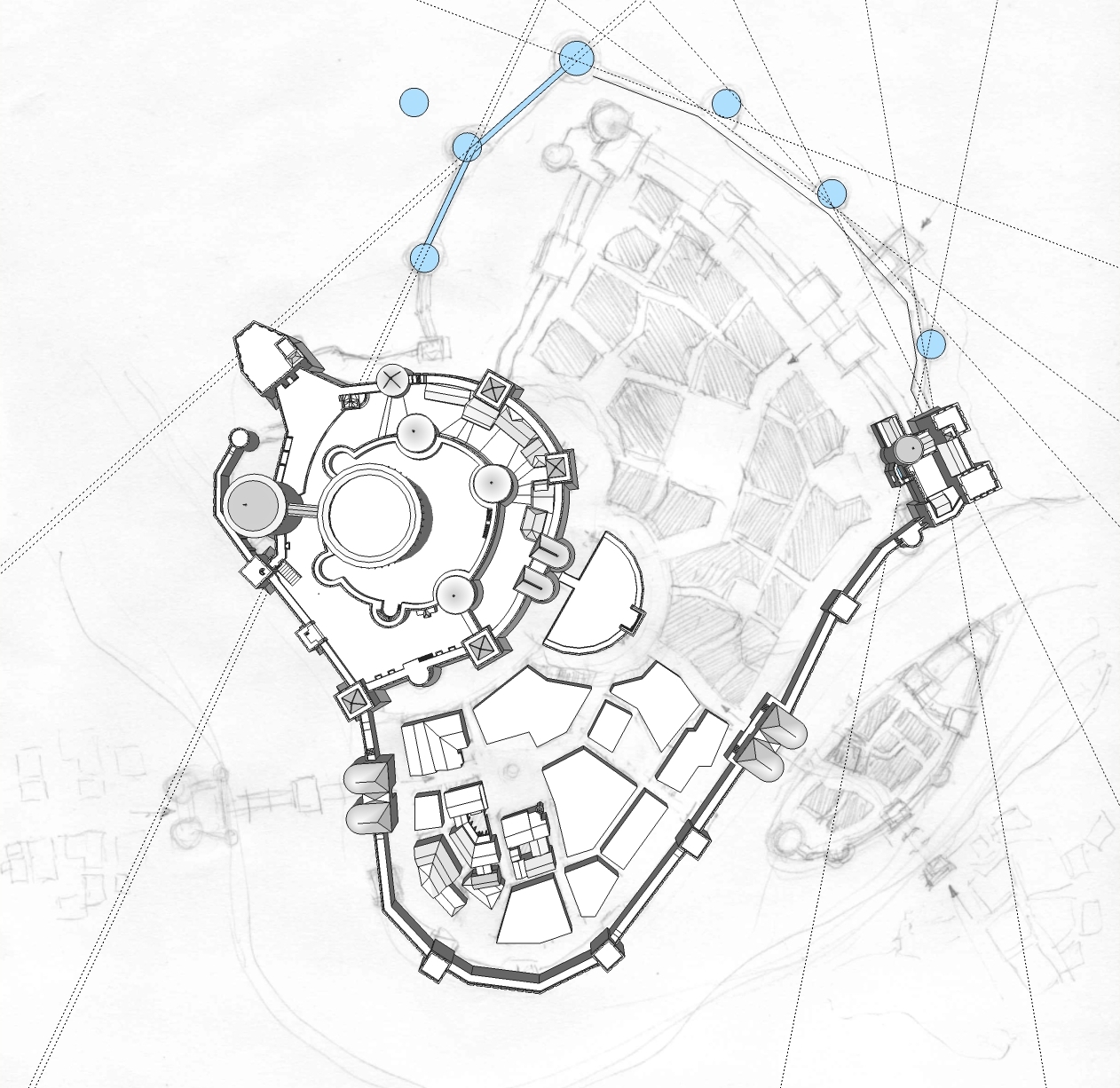 Ok, not much has been done since the previous post I admit but I’ll still give you a few screenshots. 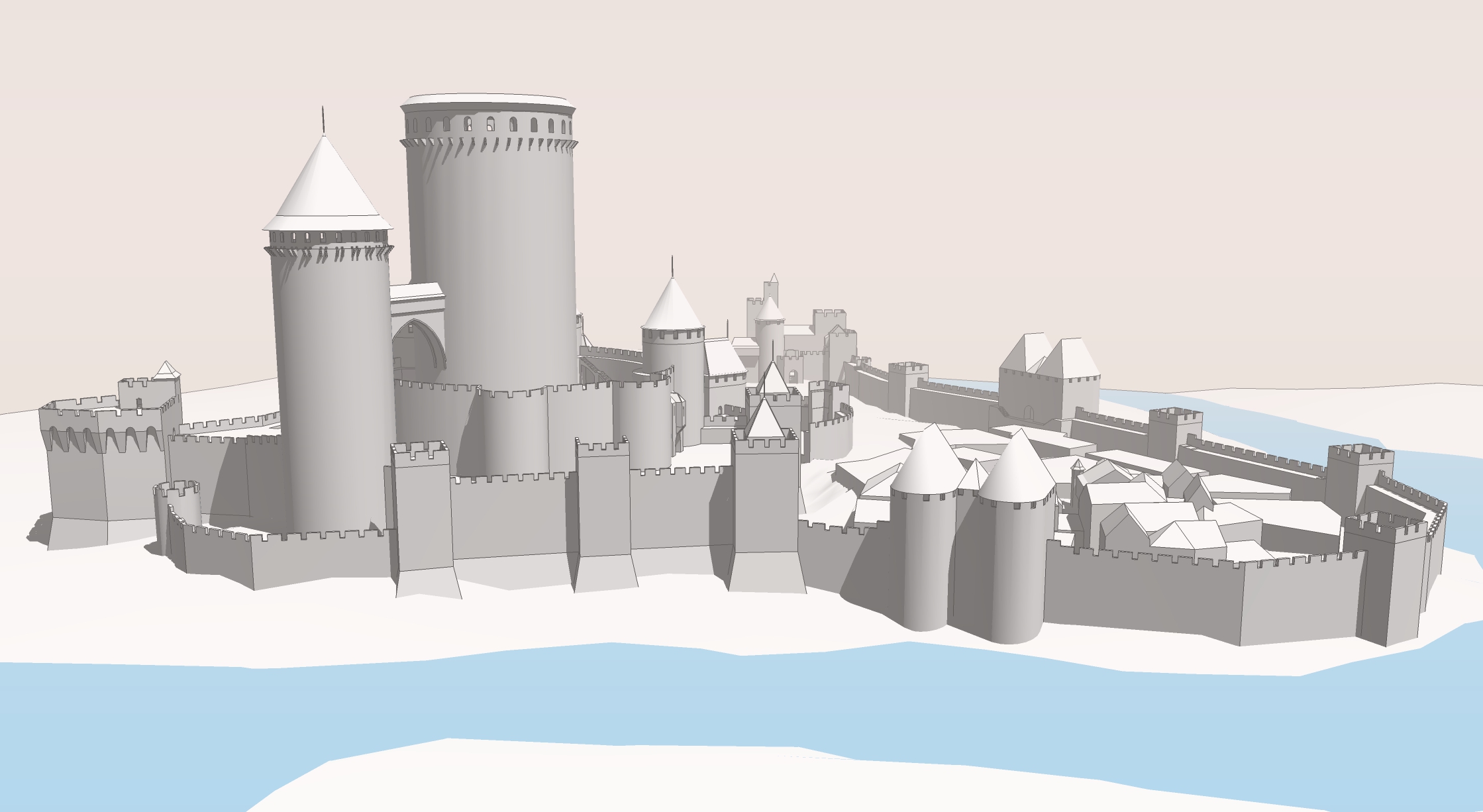 The gate and the fort were connected by walls. Now I need to connect the fort to the citadelle. 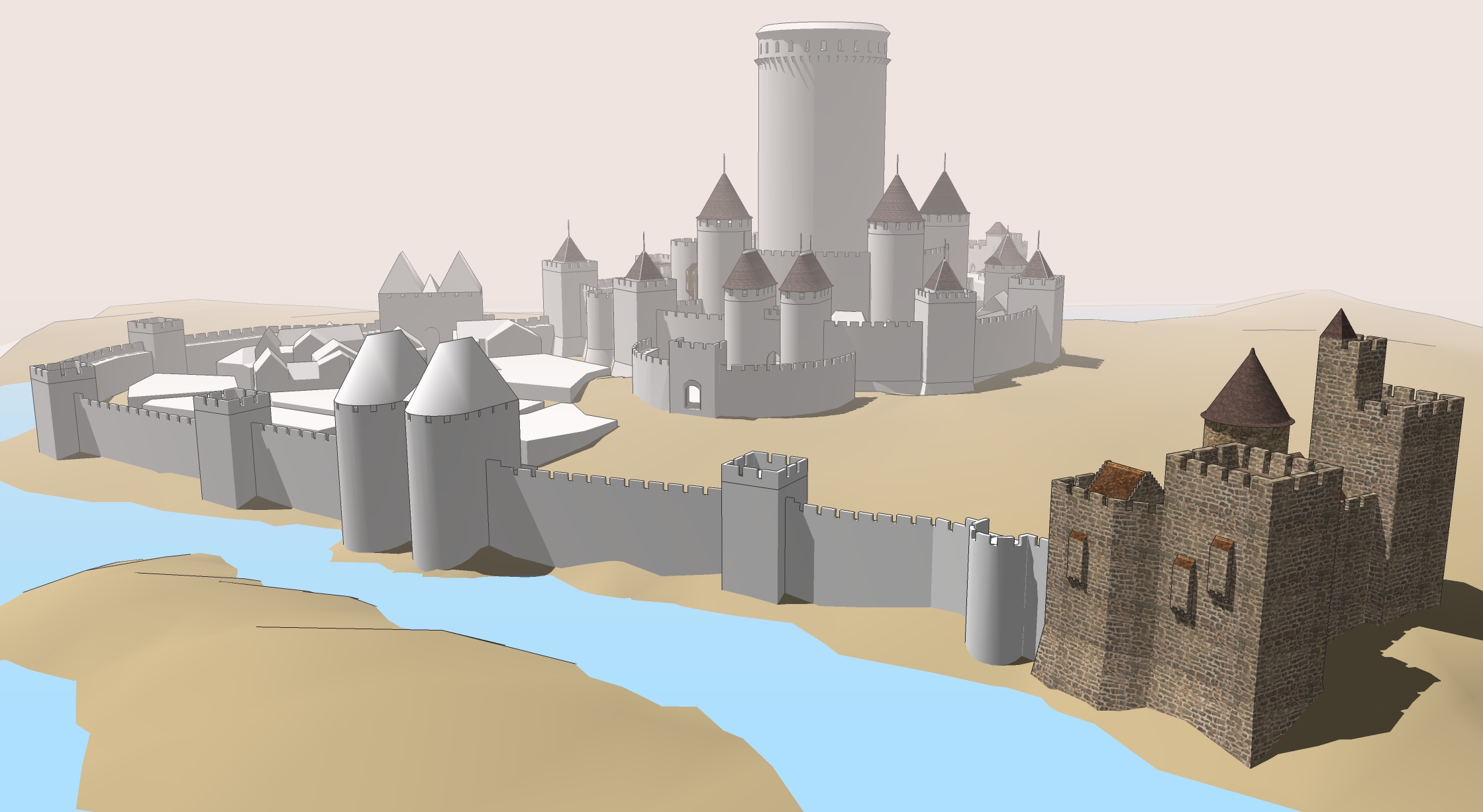 Some houses got a roofing upgrade. I initially intended to model each house separately and import them back in the city model and started a couple of them but I quickly feared I would not have the time nor the courage to proceed with everyone of them. So I went for a quicker method of just modelling the silhouette. 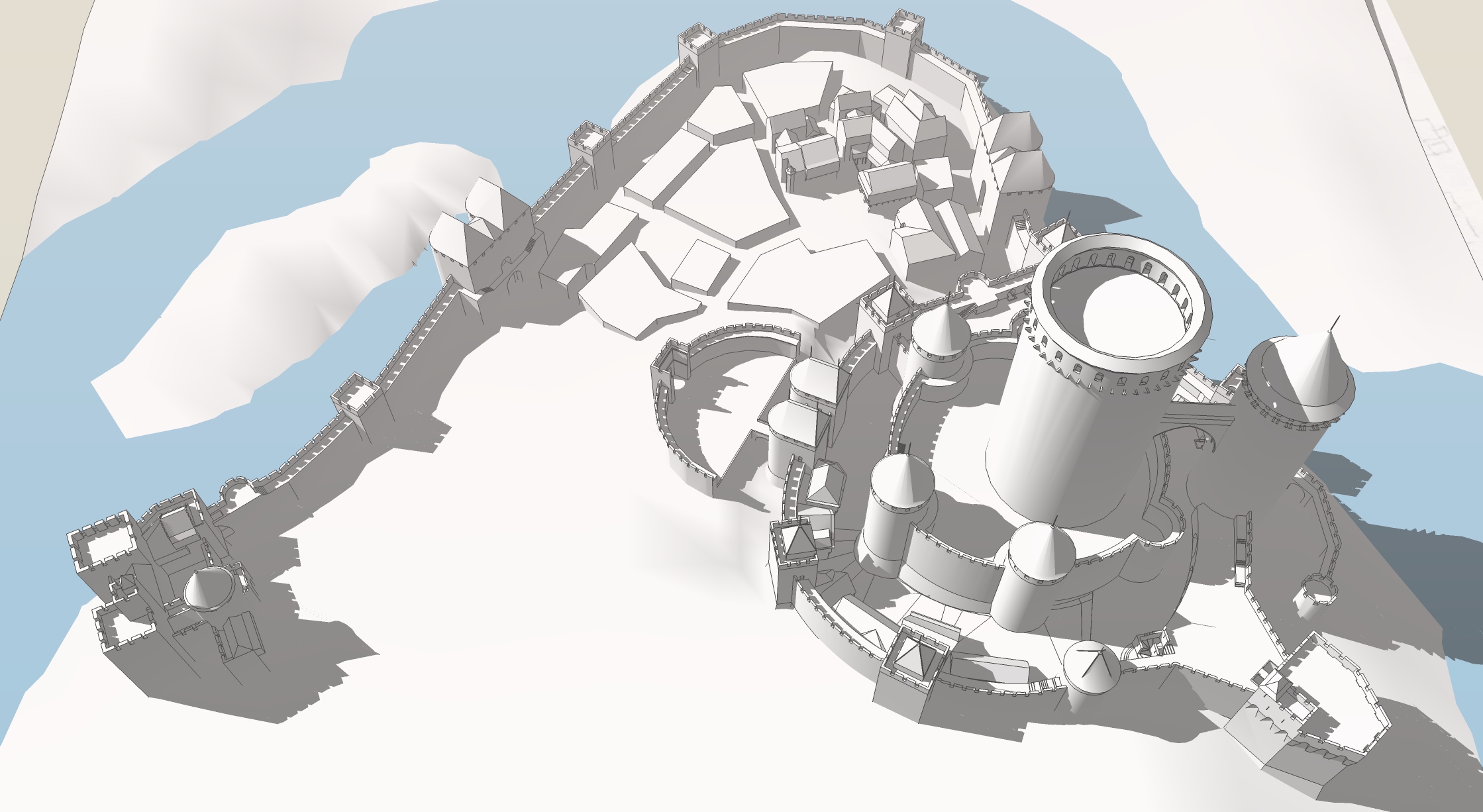 A wall has been added behind the citadelle to protect the poterne. I think I will have to close the gap and put a passage instead of just leaving it open, although strictly defensively, it wouldn’t make much of a difference given the massive fortification that covers the passage.

Of course the poterne will eventually need a ramp to be accessible. 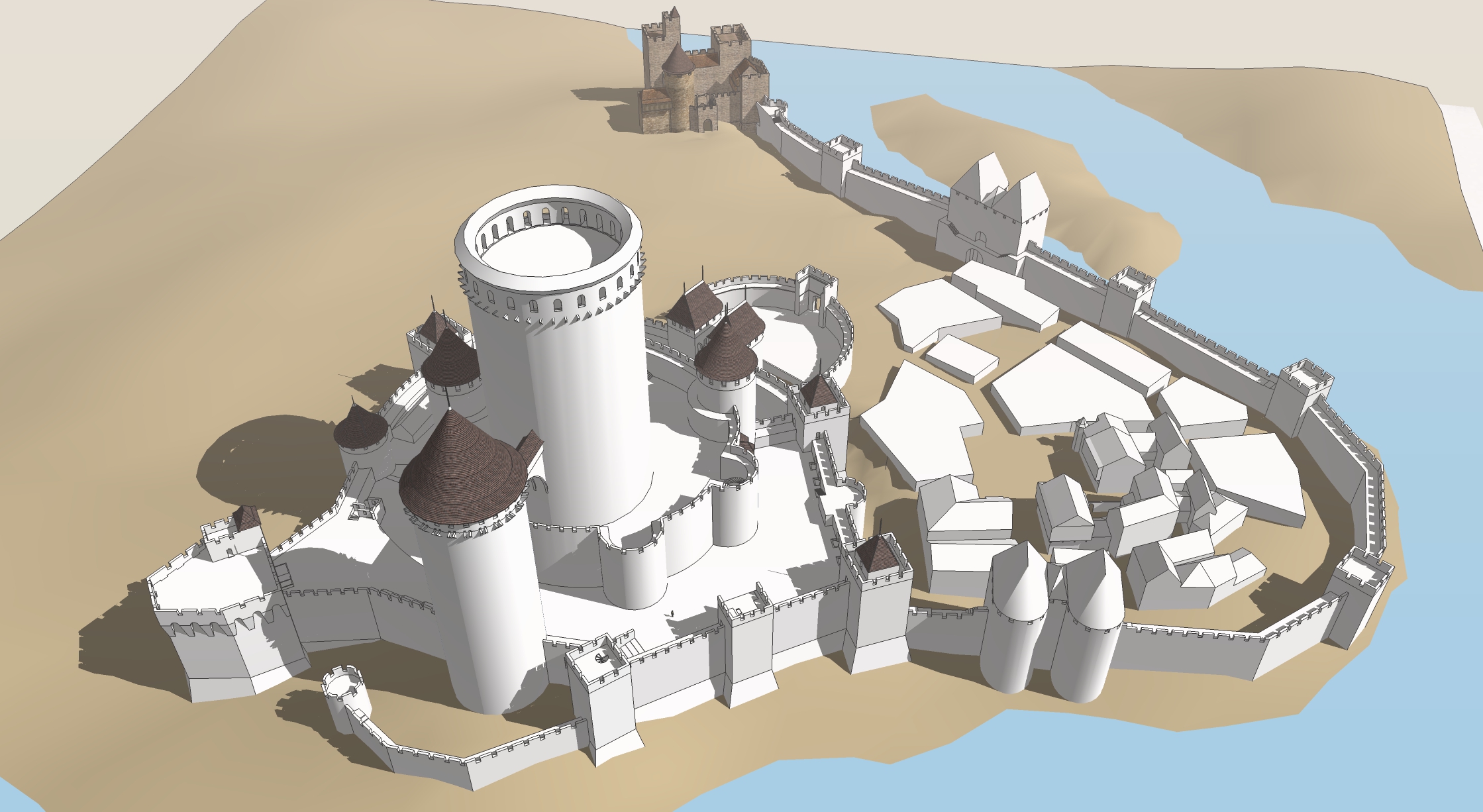 Here’s a house I’ve been detailing a little bit to give more interest to the square. It’s not a lot I admit but from far away and if all houses are treated the same way, once it’s textured properly, it could quite sell the shot. 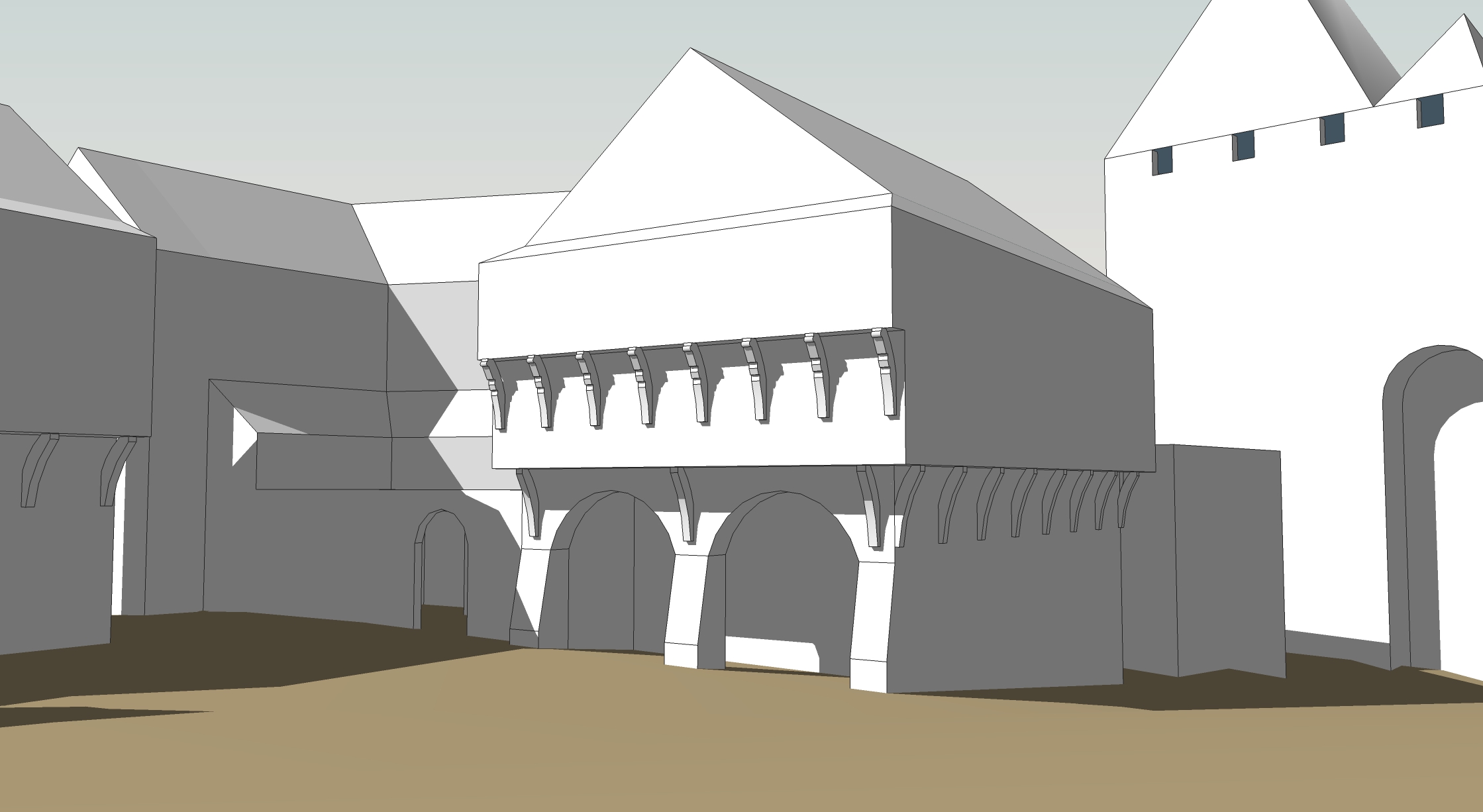 A view from the tip of the citadelle looking towards the fort in the background. I just see now that one of the crenelation is larger on the foreground and I remember I intended to put in a machicouli because if I remember well, it is right above the entrance of the bastion. An other one of those “I’ll do that later” moment I guess. 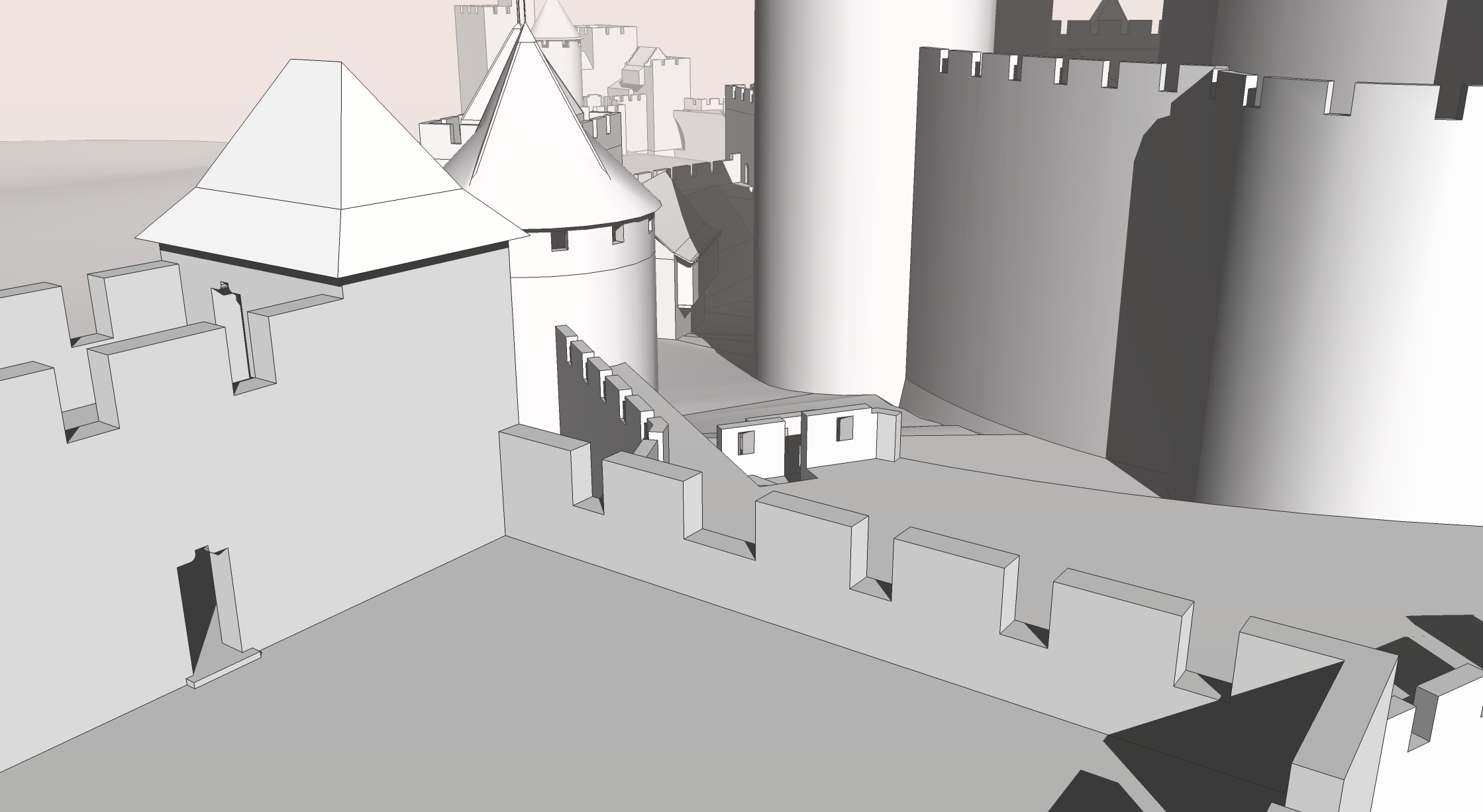 While I put some doors in the square towers, I noticed I did do that for the round ones, I guess the complexity of the geometry of the curved wall put me off at the time, but it should be dealt with at some point. Those kind of small details have the incredible power to give life to a model by attracting the eye and giving a sense of scale to the whole scene. 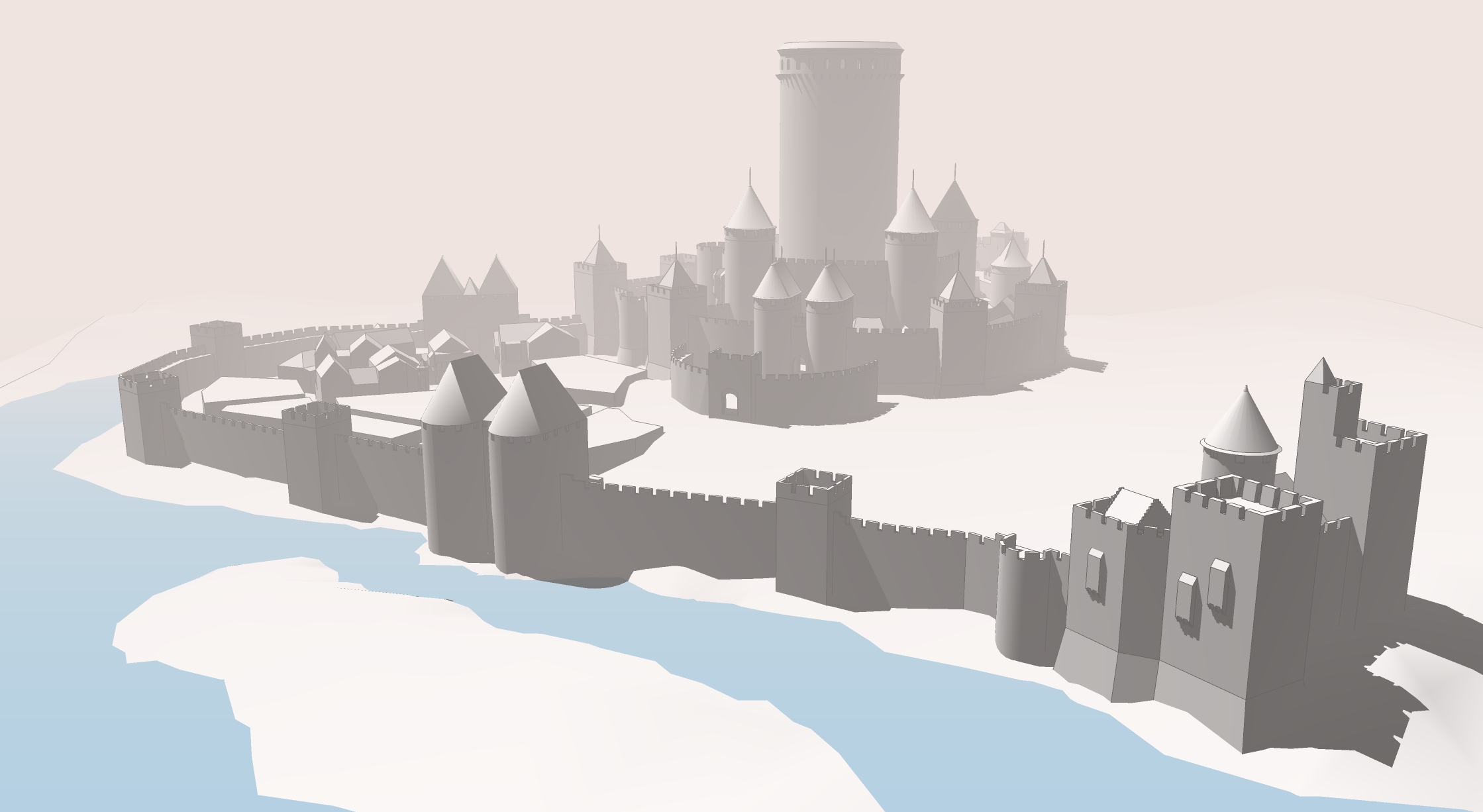 That’s it for now. If you like it, just let me know and that might stimulate me to find the time and energy to continue the model.

I’ve been progressing slowly through the modeling of the town but the scale of the work is getting its toll on my dedication. I need to take a break and do something quick and easy that would stir up the motivation with an instant (or almost) gratification. All right, not instant, but within a few hours range of work. The kind of fairly quick work that makes you feel good about your own progress.

So, I set out to model a small part of the city defenses that stands out on its own, a fortress that is attached to the outer wall of the city, near the river. It’s a fortification that is supposed to be able to work independently of the rest of the wall fortifications so it should be easier to model it separately.

END_OF_DOCUMENT_TOKEN_TO_BE_REPLACED

After a big diet, my Sketchup file went from 14+ megs to a mere 3.2 megs (see episode III). It allowed me to work much, much faster on my old and trusty PowerMac G5 Quad. So I managed to get most of the castle done. Pretty much everything is in place by now. I might come back to certain parts later on but for now, it’s time to concentrate on the rest of the model: the town and the terrain around the castle.

After selecting all the outside geometry of the castle’s base, I duplicate it and make it a surface to make sure all segments of the geometry are well connected.

Next step: after raising the whole model 10 meters from the ground (the castle is hidden to ease the manipulation of the base), I pull the base 10 meters down to the ground with a bevel effect (not too wide) to create the foundations of the castle. This stage needs a lot of cleanup work in the geometry because many of the angles of the base will create a bevel that overlaps and messes up the whole geometry.

END_OF_DOCUMENT_TOKEN_TO_BE_REPLACED

After trying a few textures variants and fiddling with their size and position on the model, I went back to the business of adding details. First, I finished adding doors to all square towers (the easiest to modify since the geometry is flat).

Then, a proper doorway in the inner wall was built with a machicoulis. It’s a group that is simply stuck in front of the wall to simulate a entry, but it’s not actually going anywhere at the moment. I might add a real passage through the wall later on but for the moment it’s just fine like that.

END_OF_DOCUMENT_TOKEN_TO_BE_REPLACED

By now, most of the big structures had been built and the slow process of detailing was about to begin. This stage of modeling, while crucial for the quality and feel of the model is quite complicated by the fact that you need to set some limitation to the amount of detail you want to incorporate in your work. While a lot of detail will definitely make the model more believable and pleasing, it will also put a heavier burden on the software and the machine you use. I find it hard to determine the right balance between useful details and unnecessary anecdotes. This balance is also very much dependent of the conditions under which you plan to use the model. For this project, I don’t really have any targeted use in mind at the moment so I guess my machine’s performances and my time will be the most decisive arbiters.

As the pictures below shows, all towers are done, battlements are finished and the houses along the outside wall are roofed.

END_OF_DOCUMENT_TOKEN_TO_BE_REPLACED

How it all started

When I first bumped into Sketchup some time ago, it immediately got me hooked. Not that I was new to 3D, but its ease of use, intuitive interface and philosophy just impressed me to a degree that seldom happened in those past many years of my computer wandering. It’s just not every day that one can stumble in such a nice piece of software which by the way is free.

When some weeks ago my eldest daughter got an assignment in school to build a simple model with Sketchup, it enticed me to start a project to demonstrate my kids the possibilities of the program. Since I’m fond of medieval stuff and had already taken my kids to visit several European castles, which didn’t fail at captivating them just as it did with me when I was a small child, I choose to build some sort of castle.

So, I sat down at my computer and thought it would be nice to build a small city with fortified walls and a castle attached. For that I needed some kind of planning, a map would be great I thought and I started drawing a top down map of a fictional medieval city on a sheet of paper. A river was definitely a great feature to incorporate and here is the resulting sketch. Once finished, I scanned the drawing to use it as a reference in Sketchup. 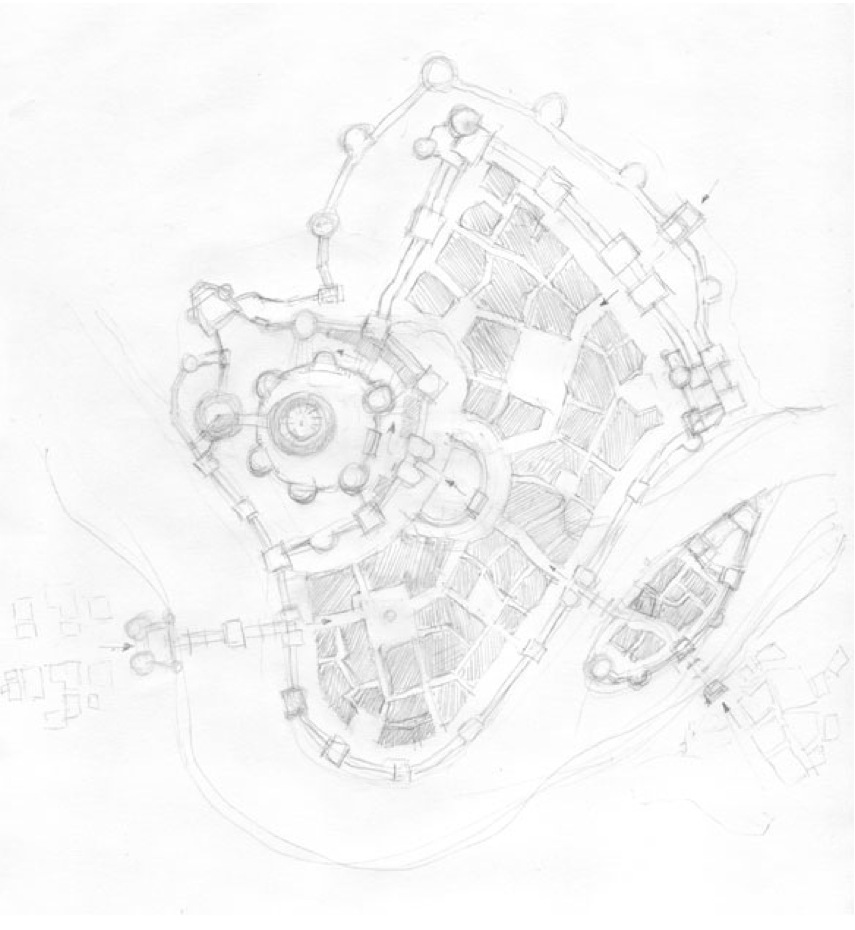